A Belfast experience by Manuela Schorn

First of all I want to introduce myself. I’m Manuela Schorn 19 years old and I’m working as an assistant in an international company in Austria. Last year I got the chance to work abroad with the Leonardo da Vinci program. So I took the chance and decided to go to Belfast. In Belfast I have worked for the Student Guidance Centre at the Queens University of Belfast. There I have improved my English language skills. I also have learned a lot of the culture in Northern Ireland. The people were very nice – felt like home. Typical for Ireland is the bad weather situation but no one cares. Nevertheless the people are happy and you can find them in the old Irish pubs where live music is playing.

Belfast is known for the Titanic that was built there. So we were watching the Titanic memorials and the museum which is one of the newest and most modern museums in Europe. And it was great. You feel like being on the Titanic. You can watch the rooms and suites from the 1st – 3rd class so it was very impressing.

There we have talked of the differences in our countries. We also met other young people from Spain which also took the chance to get the experience abroad.

So all in all I would naturally do this again. And I would advise it to any other young people which have the chance to do that 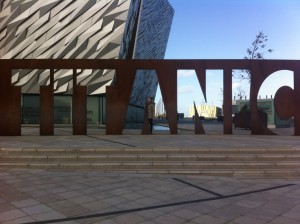 Having taught all over the world, Madeline is passionate helping young people to find work opportunities overseas. She is a co-director of Intern Europe and ESPA which are dedicated to helping young adults find great work experience and internships across Europe.