Our journey to the flash mob started with the creation of the Facebook event on March 30th, 2015.

We invited all our friends via Facebook and all Intern Europe’s interns via e-mail. We were so excited about this project that we couldn’t wait to start.
A series of Skype interviews were scheduled with Madeline, who is responsible for the project at Intern Europe, in order to plan the event together. We discussed the different possible venues and finally agreed that the best would be Arthur Square next to “The Spirit of Belfast” monument next to Corn Market.

It is a central part of the city and on Saturday afternoon this area is particularly crowded and animated not only with young people but also with families and children who are going for a walk or for shopping.
All of them represented the perfect audience for our dissemination “mission”.

After the creation of some flyers, we went around Belfast and handed them to shops and people on the street. The most part of them were curious to know more about MOB G.A.E. and we were very happy to satisfy their curiosity. Afterwards, we contacted a series of local newspapers, televisions and bloggers in order to advertise the flash mob online as well. 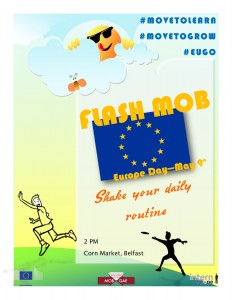 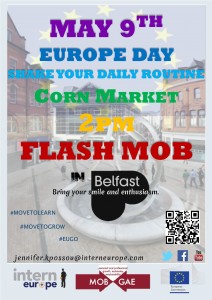 1st meeting 9th April – Maggie Mays, Belfast
We went for a delicious milkshake and for the first time we could discuss our initiative with young European students, interns and professionals. We first explained what a Flash Mob was and more importantly its purpose: to disseminate the results of MOB G.A.E.’s research.

(You can find the report of the research here).

It turned out to be a great and inspiring meeting from which we gained great feedback about our ideas and also new outlooks and fresh points of view. Unfortunately, three of the participants were unable to be in Belfast on 9th May, which proved to be a challenge for us. Nevertheless, we came up with some original, new perspectives and started developing our project with enthusiasm. 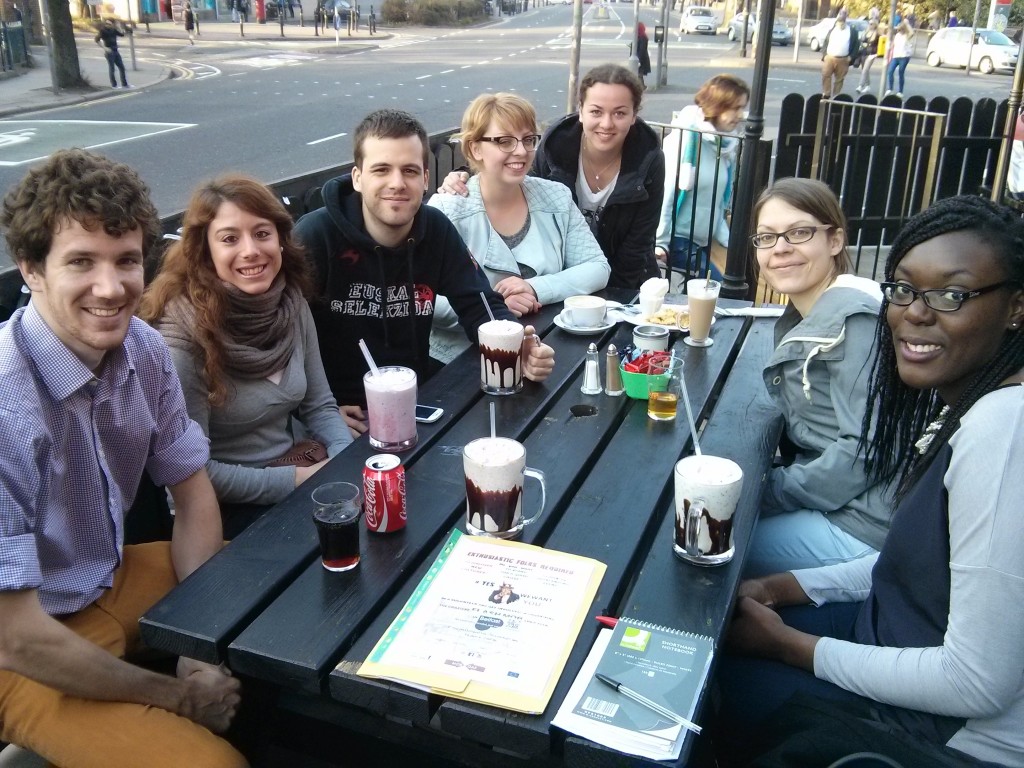 We were very lucky because one of those smiling faces had already taken part in a flash mob as dancer in her hometown, and she is also a dancer; I am talking about Cristina, from Spain. She was in Belfast to improve her English and to do an internship. She helped with choreography even after her departure.

2nd meeting 16th April – Queens Students Union
During the second meeting, we welcomed some new members and talked about important issues such as the dress code, the music and the choreography. However, we still needed more volunteers! 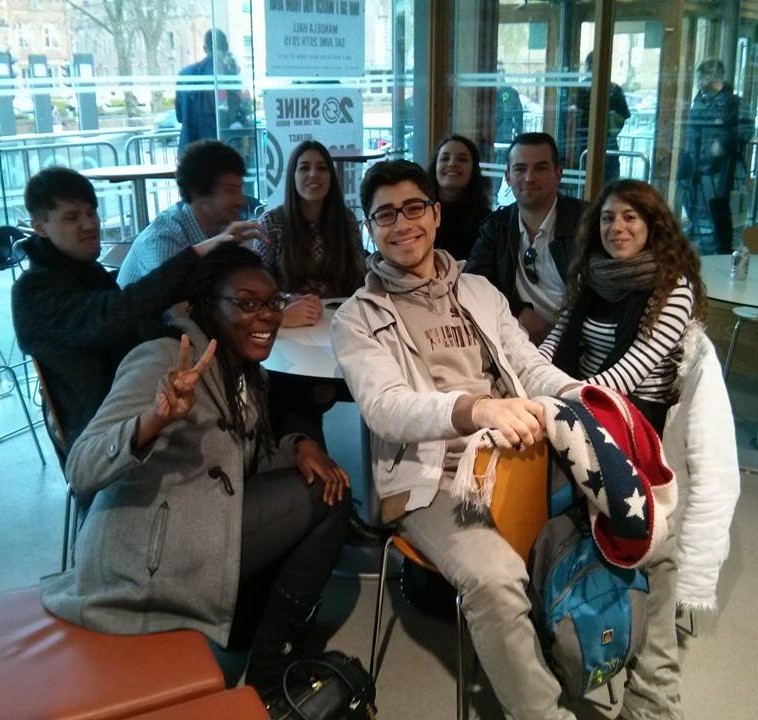 One day we met the Belfast MET students and presented MOB G.A.E.’s project. The classroom was composed of 16 first year students enrolled in film and media studies. We invited them to take part in our third meeting. 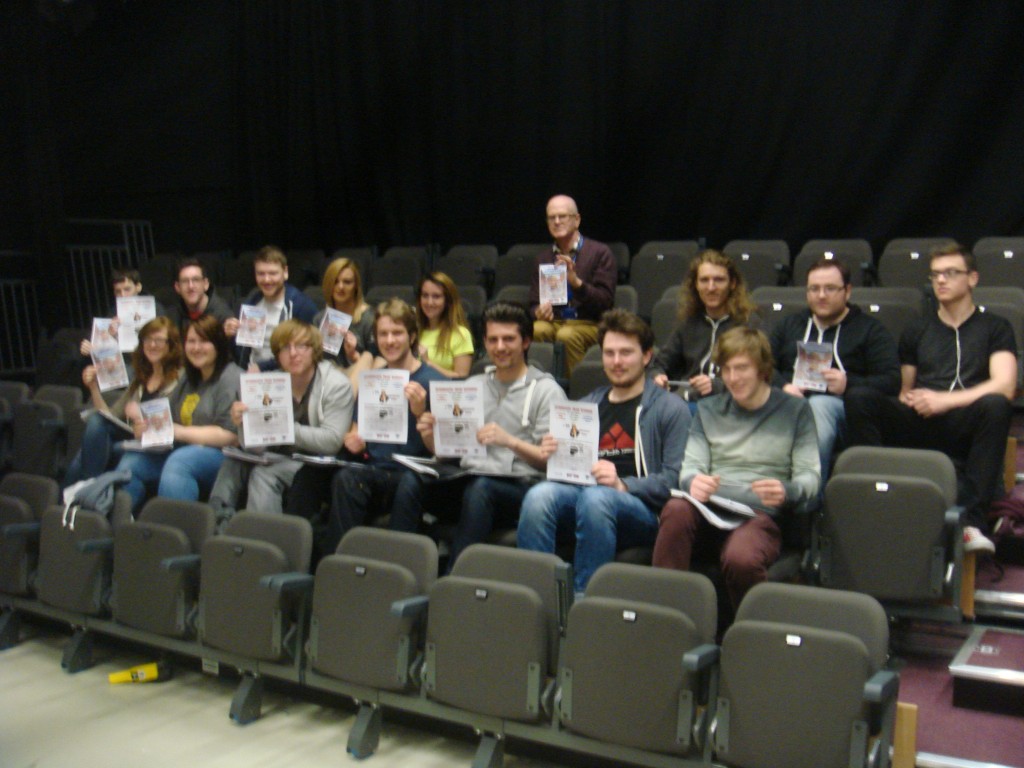 Professor Mc Kinney and his students from the Belfast MET

3rd meeting 23rd April – Queens Students Union
Some of the Belfast MET guys came to our meeting at the Queen’s Students’ Union Bar and had a chat with us sipping a drink in a relaxed environment. They seemed to be very enthusiastic and interested in this project since they affirmed to feel part of Europe and ready to share European values helping us in the dissemination process of MOB G.A.E.’s report results. 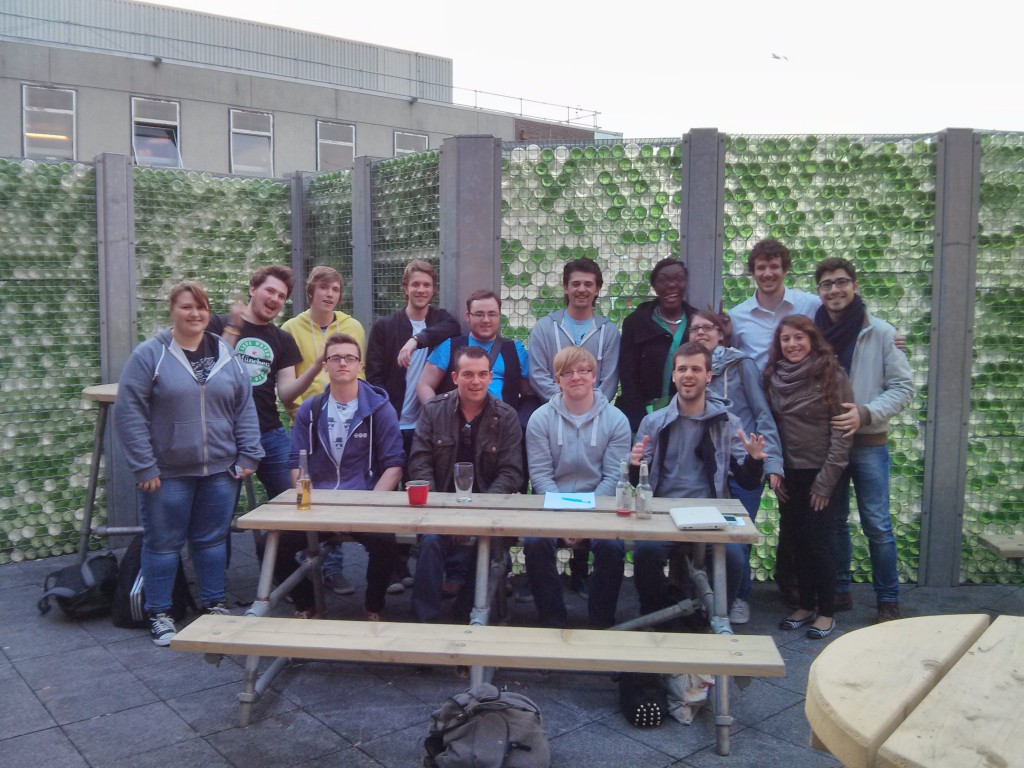 A few days later, we went to talk to the European Commission based in Belfast and to let us advertise the event by putting our posters on the main entrance window and they even gave us four European Union flags for the flash mob. Isn’t it great? 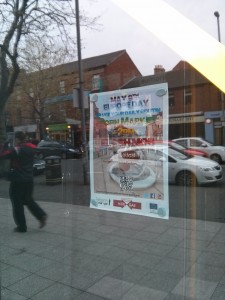 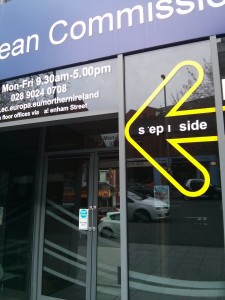 We were a little bit sceptical about this last meeting since our plans seemed to be changed when the Belfast MET guys told us they couldn’t be there for the flash mob but, fortunately, new people joined and we could rehearse as expected. It was a very nice afternoon.

May 6th we got an article on the Belfast Vibe blog. Hooray!! Check it out

We designed and drew our “Happy Europe Day” t-shirts 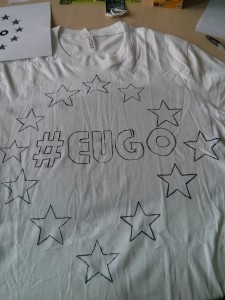 One of our challenges was indeed to decide what to wear. At the beginning, we were supposed to receive some t-shirts and gadgets for the flash mob but because of shipping delay we were informed that the parcel wouldn’t be here on time. The first reaction was to ask ourselves:

“Seriously? Is it a conspiracy against us?”

But since we are persevering, we like challenges and as an old quote from the Coran says:

So, we decided to create the t-shirts ourselves and it was good “craic”, it was fun working together.
We drew the 12 stars of the EU flag on the front with the hashtags about the event provided by MOB G.A.E. (#MOVETOLEARN #MOVETOGROW #EUGO) and we wrote “Happy Europe Day” on the back. 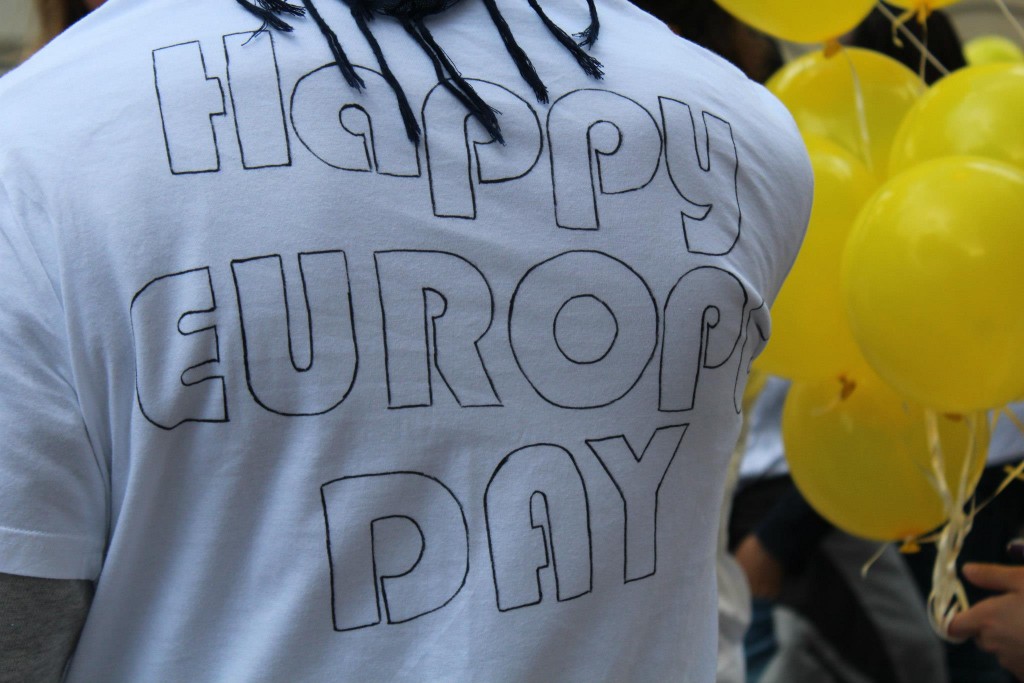 We bought a helium canister and yellow balloons (like the stars on the EU flag) in order to share them with our audience and make the people more involved.
We explained our last minutes changes to the final team, we were a dozen of young European and international people.

The big day arrived! We met around 1PM and as expected the city centre was lively.
The weather was good, the sun was shining up in the blue sky, covered from time to time by some scattered-fast-moving-fluffy-white clouds.
A big parade was going on in front of the City Hall because of the 70th anniversary of VE day and the Battle of the Somme in honour of the First and Second World Wars deaths.
At Corn Market, a Scottish pipe band were filling the air with music and next to the monuments three guys were dancing with fire sticks to the rhythm of tribal music and catching people’s attention.
We had to deal with unforeseen circumstances, so we talked to the band members and they agreed to be part of our flash mob playing their instruments at the end of our show and the dancing guys just helped us in grabbing people attention.
We started with greeting children and adults on the street using our native languages and giving them our helium yellow balloons. The people, intrigued, followed us to the Spirit of Belfast, waiting for our moves.

We were split into two teams, one person per group stepped on the Spirit of Hope stone seat and greeted each other using different languages (French, Italian, Spanish and Dutch) after that one team turned in the direction of the audience and shouted the flash mob motto “MOVE TO LEARN, MOVE TO GROW, EU GO”, and showed the bright European flag. The second team did the same right after.
The rest of the team was holding the EU flags and after screaming “EU GO” we released the balloons.

After the flash mob people wanted to take pictures with us and seemed to be very attracted to the EU flags, so we couldn’t “disappear” as expected but we spent some time with our “fans” on the streets of Belfast since they wanted to know more about MOB G.A.E. project. 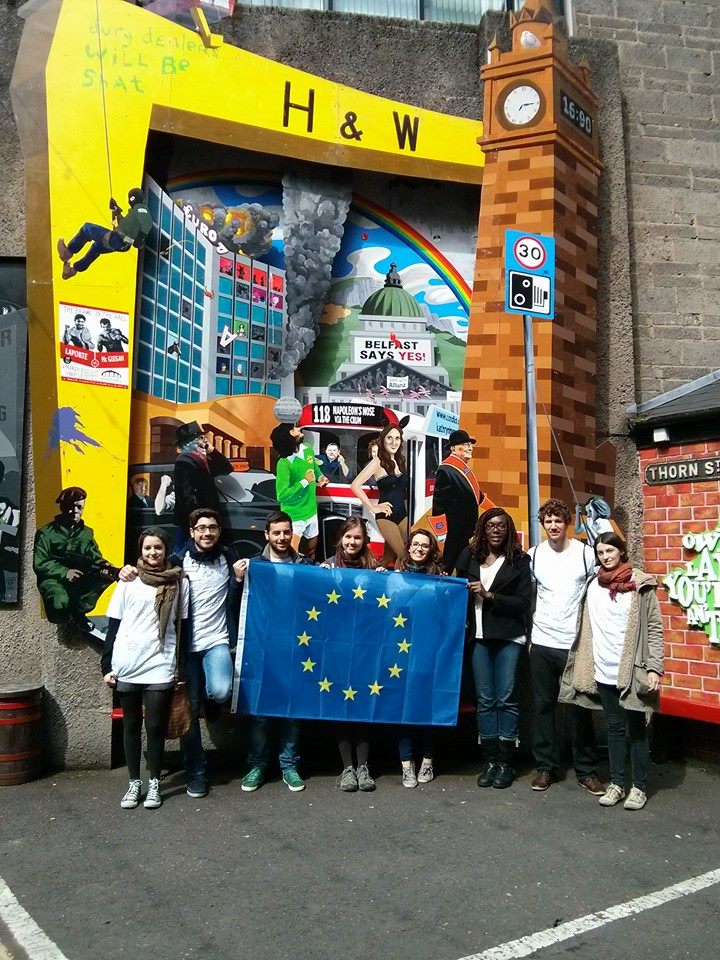 At the end, even if the flash mob wasn’t the size or the type expected it was a big success. We had the chance to meet new friends from all over Europe and to spend some good time together. After the event, we went to grab a drink and we walked around proudly wearing our “Happy Europe Day” t-shirt! 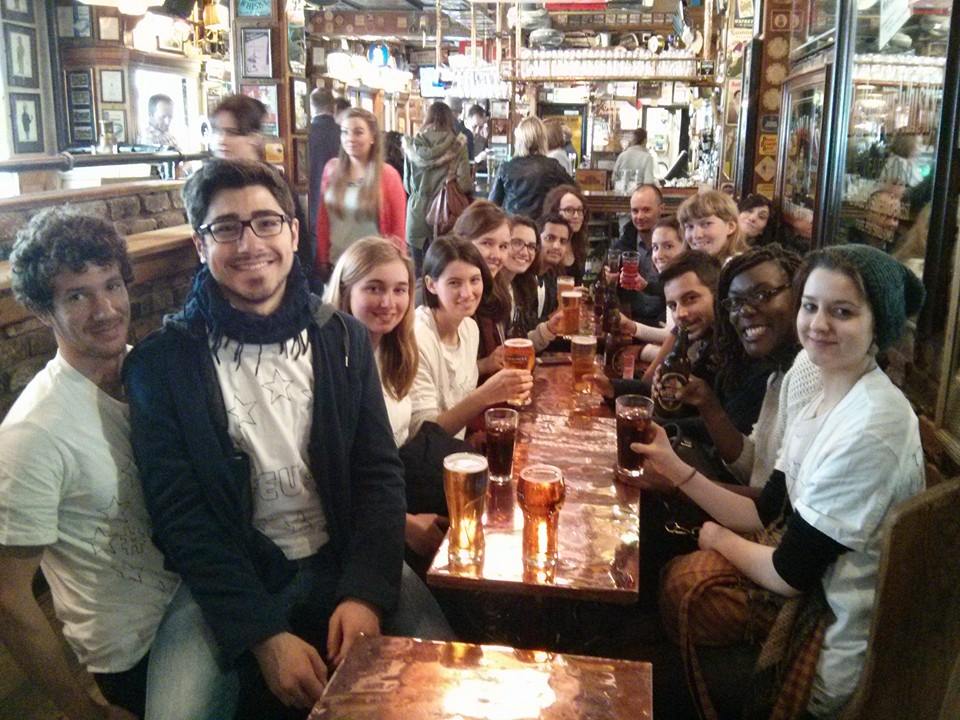 For this reason a big thank you goes to all the volunteers who made this possible, thank you for your patience and collaboration; they are Laurin (from Austria), Sarai and Cristina (from Spain) Dorothee, Maren, Elisabeth and Hannah (from Germany), Jennifer (from France), Valerie (from Belgium), Luigi and Guido (from Italy), Ruth F. and Ruth B. and Neil (from Northern Ireland) who took pics and videos. 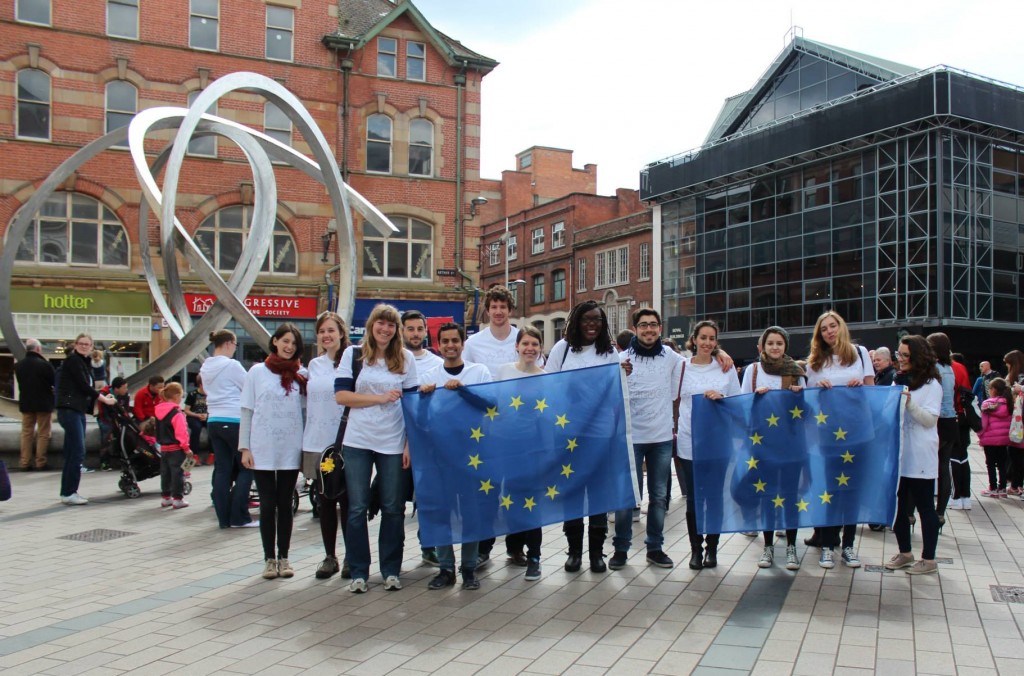 Enjoy some pictures from the flash mob below and check out Intern Europe Facebook Page for more!! 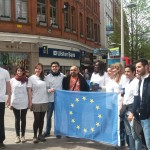 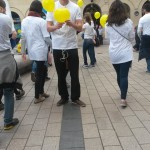 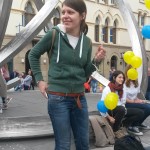 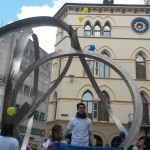 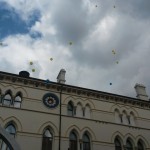 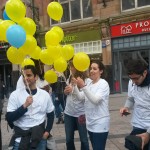 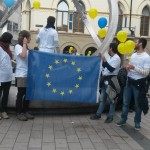 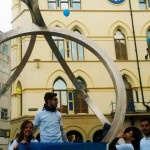 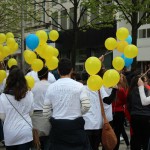