European Programmes gave me the opportunity to meet people and to grow as an artist and an individual! 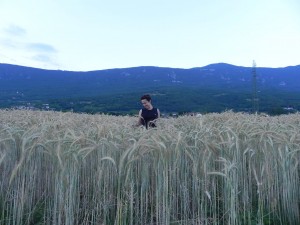 From Italy to Romania

I graduated in 2006 in Film History and Criticism Cinema at the University of Florence – D.A.M.S. with Professor Alessandro Bernardi. I’m currently living in Scandicci (Florence), but I also travel around Europe. Active as an artist and independent video-maker, I have been working for years on the urban environment, with particular attention to the changes that occur and to the emotions and feelings of the people who inhabit it.

In the last years my work has been oriented also to the study and research of the sound.

I’m also engaged as a curator in the artistic direction of European projects, developed out of the artistic research carried out in the countries I visit most.

I have been collaborating since ten years with Associazione Fabbrica Europa, now Centro di Creazione e Cultura, of which I am a member, and with the European network Roots & Routes, developing projects in the field of visual art, education and interculture.

My first participation to a European project was in the frame of the multiannual Culture project “Roots & Routes”, concluded in 2008 with the interdisciplinary performance “A_Maze” at the 17th edition of Fabbrica Europa festival “Europe ↔ Mediterranean ↔ Orient”: an important step in the stabilisation of relations and experiences within the R&R International Community, in synergy with aims, activities and venues of the Department for University, Research and Youth Politics of the Municipality of Florence.

After this experience, I started to move also around Europe. I took part in “Culture Hunting” organised in collaboration with Consorzio Metropoli, Cooperativa Isola di Arturo, and with the support of the Tuscany Region, the Province of Florence, Ente Cassa di Risparmio di Firenze and the National Agency for the “Youth in Action” Programme. Within this frame I realized in Romania “Note di e su Bucarest” (Notes on Bucharest), a report on the musical underground culture of the capital.

When back home, I started to collaborate with Ginger Zone (Youth cultural centre) in Scandicci. In this exchange I had the opportunity to meet BridA (artistic collective from Slovenia) with whom I’m still working on different projects. They were in Scandicci to work on a site specific survey on the town (Modux) and I was working on the documentation and coordination at a European art venue. https://www.youtube.com/watch?v=G9gHSOF8xuk

Some years later I was hosted by BridA at their artist residency, and the fruit of the work was exhibited in a group show “De-fragmentation” curated by BridA at IMCR Center, Stewart Hall, University of Maine (US). I was virtually in the United States with my on-line game that allows to communicate by distance. http://www.brida-kud.si/pane/

I’m also collaborating with Fondazione Fabbrica Europa in the project “Nostoi – histories de retours et d’exodes”, moving in the Mediterranean area and working on the video documentation of the project. http://www.nostoi.eu

The European mobility projects gave me first of all, the opportunity to travel and to meet people coming from different cities and cultures.

From Europe I took back home a very interesting input and inspiration. In my opinion speaking about Europe is not just EU, I don’t like conventional, ideological, political and artistic limits and borders.

I’m working also as a peer coach with children and teenagers, making laboratories in the public school and at the Academy of fine Arts in Florence with “Feel the music – Self Definition” (http://www.u-care.org), and in Slovenia in a municipal kindergarten, again with the collaboration of BridA in the context of the 14th edition of “Pixxelpoint”, International Media Art Festival, Nova Gorica. http://www.pixxelpoint.org/2013/indexeng.html

In Europe these professions are more recognized and it is easier working on education combined with art. I have been trained to become a peer coach in another European project promoted by the Roots & Routes network, “U-CARE. Urban Culture Against Racism in Europe”, first in Florence and then in Germany. I think it would be nice to have a system that allows to introduce more art and culture at school and in the everyday social life like in the rest of Europe. We should open the door to a more European concept of arts and education.

I can say that thanks to European mobility I had the opportunity to grow and discover different cultures and experiences that enrich me as an artist and as an individual.

Now I’m living my niece’s experience; she is involved in an “Intercultura” project, an international exchange for teenagers in Secondary School. At the moment she is in China and I think that this event will change her life. Thanks to technology, distances don’t exist anymore so I feel her closer.

Age might be a limit in some job application to continue to work in Europe after training.

But through the networks that I have built thanks to European and extra-European mobility I can keep in touch with the rest of the world and discover what people are doing, too.

In these days more than ever, we are all fighting for equality, mutual understanding and peaceful coexistence.

See you somewhere in Europe!