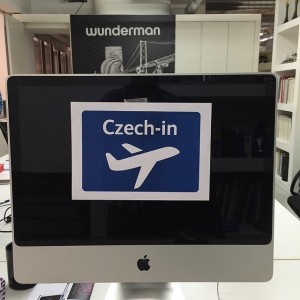 As the biggest hot days someone like to escape in thoughts to snowy mountains – in winter you return back to sunny beach. I am glad that I have now the opportunity to write these few lines, by which I move, at least for a moment, into the ocean washed Lisbon, where I was lucky enough to visit in March this year Erasmus Plus programme.
In the history of Hollar school, where I had finished my studies in June, it was the first time when students had the opportunity to go abroad for a whole month. Frankly, with the Erasmus normally you go to study for a semester but we are not here at uni but in college. And most importantly, not going to study but to work!

I was doing my choices between England, Germany, Spain and Portugal. In England I’ve already been to, Germany wasn’t such a deal as it is just behind the corner. Eventually I was approved for Lisbon, Portugal, likewise, four other girls.

So I’ve sent my preferences, CV, cover letter and go through an interview in English. For classic Erasmus in college sometimes you fail the tests of English as a friend of mine did. But there you would probably have to had cut out language if you hadn’t passed that. It was a formality, we all went through.

I did my placement with one of my schoolmate-girl in an international advertising agency  Wunderman Portugal.

It wasn’t such an adventure, what could be described in the trilogies. It is clear that as an intern you will not have to do a presentation in front of an important client. It was more or less about photo editing products, retouching etc… But what the working hours and the team! All started slowly…after ten, with coffee and leisurely turning on my iMac. At one was lunch break. We, Czechs, we use to ate the lunch during 10 minutes. But then we had time till half past three! So again: coffee. We ended up at six. People in our department were the biggest charmers in the world!
Despite the occasional language barrier we had always a great laugh.
I know that other students should had a minor problems with their placements or organization, but you never know it in advance how it will end up!

It went all right, just at night I had to sleep in a sweater as the sealing of windows in Portugal is not the best.
Overall, it was one of the best months. I gained work experience, I met new people, Lisbon sunny beaches, local customs, the true nightlife, ate the finest salmon, drinking red wine in hectolitres, and had worn short trousers in March …Let me go again, please!